A teachable moment in line waiting to see Santa 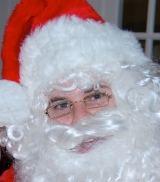 Yesterday, we were waiting in line to see Santa.  A girl behind us, maybe six or seven years old said to her dad, “I don’t want to see Santa.”  When her dad asked why she responded, “Santa was mean to Rudolph.”  As we waited, her comment lingered and began to weigh heavy on me.  Was Santa mean to Rudolph?  I quickly retold the story to myself in my mind.

Here is what I can remember, Rudolph was different and his father was embarrassed and tried to make him look and act like the other reindeer.  His friends made fun of him, called him names and wouldn’t let him play.  The reindeer teacher, Coach Comet sent Rudolph home because he was different and poor Rudolph left home in a storm because he felt as if he didn’t belong.  On his journey, he met Hermey the Elf and Yokon Cornelius and they end up at the Island of Misfit Toys.  Oh no, I thought to myself, this is too familiar.  I’ve been talking about this all semester with my students.

But, was Santa mean to Rudolph?  What was his role in the story?  Had he been a bystander and allowed this to happen?  After much thought and deliberation, I finally decided that Santa was not mean-spirited towards Rudolph.  How could he be?  He’s just a jolly old soul!  He probably could have done more in the beginning and perhaps he could have engaged the young reindeer and the teacher into a conversation on what it means to be socially responsible, but Santa was not intentionally mean to Rudolph.  I’m just glad that the rest of the reindeer figured out how wrong they were about Rudolph and I thank that young girl in line waiting to meet Santa yesterday for providing me a time to reflect on this teachable moment.

As one of my college freshmen said it best last week, “If you’re not the solution; you are part of the problem.”  Here’s to engaging more people into the conversation so no one feels like Rudolph, Hermey, Yokon, Bumble or the other toys on the Island of Misfit Toys.  As we embrace the spirit of the season, make sure we take the time to be part of the solution!

Where in the World??